Whether you want to sleep with the fishes, eat with them or fly through the waters like one of them, luxury resorts in the Maldives continue to add options for interacting with marine life.

The submarine can take up to two guests on a subaquatic exploration of the Maldives’ only Unesco biosphere reserve, Landaa Giraavaru’s Baa Atoll.

“With a professional pilot at the controls, passengers can skim over coral formations; fly through shoals of brightly colored fish; encounter creatures such as turtles, sharks, dolphins and rays; and explore the Maldivian waters down to a depth of 120 feet — all without getting wet,” Four Seasons said. The pilot narrates each dive.

Brought to the Maldives in collaboration with water sports operator, Ocean Group Pvt. Ltd, the battery-operated and air-conditioned vehicle offers a 360-degree view of the underwater world.

The Super Falcon 3S has also been designed with the environment in mind: its electric and acoustic emissions have been minimized so as not to disturb marine life, and it never lands on the seabed or reefs, Four Seasons said.

The excursions take about an hour and cost $1,500 per flight. Advanced bookings are encouraged.

The submarine is just the latest in underwater adventures coming to the Maldives. 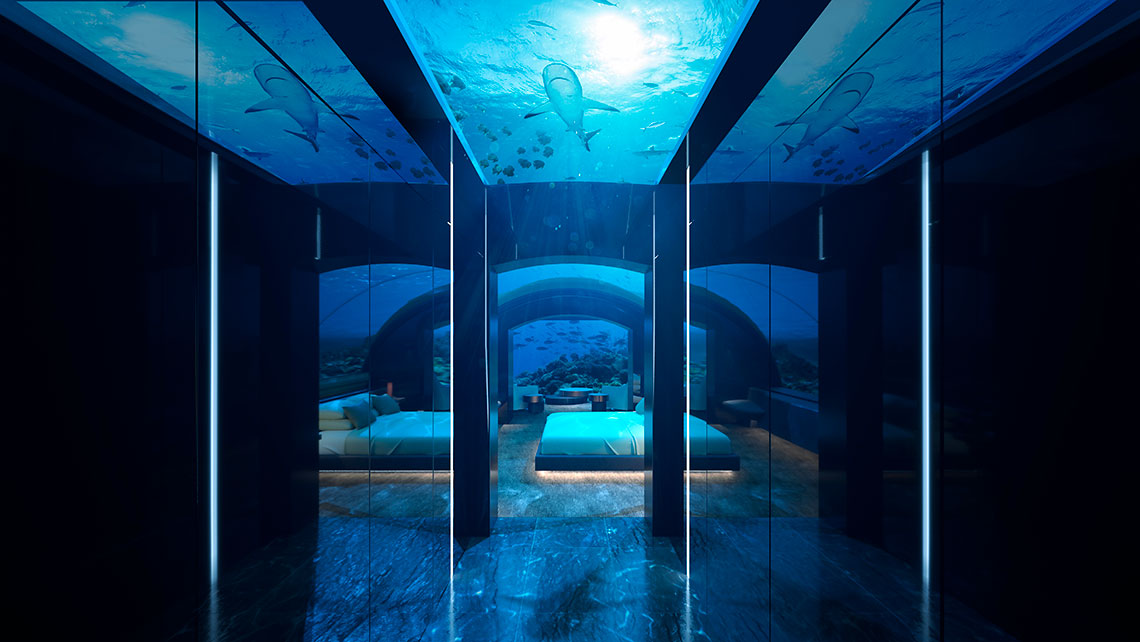 The Muraka suite at the Conrad Maldives Rangali Island.

The  Conrad Maldives Rangali Island recently said it would debut a two-level suite by the end of the year that will feature a bedroom fully submerged in the Indian Ocean.

The suite, called the Muraka (“coral” in the Maldives’ Dhivehi language) will have a 193-square-foot area where the bedroom and bathroom floors sit 16 feet below sea level. The daily rate for the 5,900-square-foot villa that sleeps up to nine starts at $50,000.

The Muraka won’t be the hotel’s first underwater structure. The hotel opened its Ithaa undersea restaurant in 2005.

On Hurawalhi Island there is another place to dine under the sea: the 5.8 Undersea Restaurant, so named because it is 5.8 meters below the waterline. The restaurant is part of the Hurawalhi resort. It will also be accessible by a five-minute boat ride from Kudadoo Maldives, Hurawalhi’s private-island resort, which is scheduled to open in October.